Paul Gilbert is back in Singapore to promote his 15th solo album, “Behold Electric Guitar”, and we met him for a quick interview. Ranked one of 50 fastest guitarists of all time (Guitar World), the lead guitarist of iconic rock band Mr. Big is no stranger to our sunny island – Paul was here with Mr. Big in 2009, 2014 and 2017, and he also came as himself in 2002 and 2005; I may have left out some tours, but wouldn’t you think he has a lot of love for his Singaporean fans? Tonight was no exception for all who purchased VIP tickets to his 10 Dec show as everyone was able to meet their guitar hero in close proximity and lose their minds a little bit. The interview of my lifetime!

I’ve always been a really huge fan of Paul Gilbert, but never in my life did I think I would one day land a super-rare opportunity to sit beside a guitar legend and enjoy some great conversation with him! When the big day came, I took all the years of experience I gathered as a performer and compressed them into this ultimate chill pill. With a deep breath, I walked forward and began my short interview with him. I asked him 3 questions.

Time was tight, and there were several others who were waiting to meet Paul. As Guitar.com already had an in-depth interview with Paul, I decided to ask 3 questions I felt would provide a more unique angle to readers, specifically education-centric questions, since Paul and I both teach. I might have taken him by surprise a little, but he had some very insightful replies to these questions, nevertheless:

The full video is at the bottom of this article.

The man behind it all

We would like to extend our deepest gratitude to a very special person, who has made Paul Gilbert’s Singapore visit happen, and he is none other than Inokii, owner of the eponymously-named record store in Far East Plaza. It’s no easy feat bringing in an artiste due to the enormous amount of coordinating work involved, but Inokii has undertaken all of this and given the local music scene a much-needed boost. So guys, if you see him at the show, don’t forget to say hi and a big THANK YOU! The rest of the band!

While I did not get to meet Asher, the keyboardist, it was great to be able to catch up with Bill and meet the bassist Roland! I previously did an interview with Bill about his experience working with Paul. Click here to read and watch all about it.

My loot for today!

Well, of course, I am still a fanboy! As soon as the camera was off, I whipped out my prized possessions and got Paul to sign them! If you pay careful attention, Paul has been using my guitar the entire time during the interviews. Paul agreed to sign at the back of the headstock because we both feel that the front is too beautiful to have something signed on. I also got my copy of his “Intense Rock II” signed. He was really surprised to see that book because it has been a really long time! While Evigan Xiao was conducting his interview with Paul Gilbert in Swee Lee Singapore, they talked about a mysterious pedal sitting on his pedalboard. There was no indication on that black pedal about what the knobs do or what it does. As far as I can share with you at this point in time, this is a new prototype pedal developed by a pedal maker and will soon be released as a product for the market. Perhaps, if you are at the front rows of the show, you might want to pay real close attention whenever this pedal gets activated. No prize for guessing which pedal maker is behind the black pedal. The signs were obvious!

Tonight was amazing. Tomorrow will be crazy! 2019 has been a great guitar year, with not one but TWO close-up sessions with my idols. In case you missed it, I met up with Jack Thammarat in his studio in September! Read all about it here! Thank you our dear photographer Alvin for the lovely shot!

My Interview with Paul Gilbert The Paul Gilbert Ibanez PGM Mikro is the latest addition to the collection and we notice that it has been selling like hot cakes! However, the Ibanez PGM (Paul Gilbert Model) has been terrifyingly awesome since 1989! Paul’s first signature model, PGM100, was made by Ibanez and has a purple body with pink painted f-holes. It features the popular Ibanez RG body with a floating bridge instead of a fixed bridge, like most of his later models. The fixed bridge came about as Paul started to develop his monstrous guitar techniques! I briefly remember from an interview that he doesn’t enjoy the feeling of the floating bridge on his right hand and prefers it flat. In any case, we fans sure enjoy the fixed bridge as much as he does. Don’t be fooled by this smaller guitar and classify it a kid’s model or a toy. This guitar is made for really crazy moves! Ultra wide bends, super wide stretches and really just about anything that you otherwise won’t be able to accomplish on a regular guitar. Paul has been using this latest addition on many gigs and boy, the notes produced by this guitar is out-of-this-world! Words can’t do justice to what it is capable of, so we made a short video to share what you can get out of this guitar!

Probably the shortest ever video to convince you to buy a guitar!

In this video, Vinnie incorporated…

I’m sure there are many reviews out there about this model by now, but we just wanted to assure you with our most honest review!

Yes, the default string gauge is a little too skinny and the tuners are not helping the strings stay in-tune. Every so often, you will need to tune your guitar again and the tuners do not have the best gear ratio. But hey, these are an easy fix! We see this as minor and we are comfortable with using this string gauge because of the wide and wild bends it allows. We would advise you to upgrade to some locking tuners though.

You will be glad to know that the pickup sounds really awesome! There is no need to look into replacing better pickups for this guitar! The amount of gain is enough for you to cover any Paul Gilbert songs easily and the tone isn’t like a typical cheap electric guitar. Really glad with the tone!

The only other hardware that you may want to consider replacing would be the input jack. Perhaps it is a one-off case but our PGM Mikro did come with an input jack that was almost impossible to plug in the cable. We swapped it for switchcraft but you can probably stick with the original hardware.

Bridge is very well made and the paint will probably not come off or tarnish any time soon!

A typical guitar in this price range will probably come with horrific fretwork. Not in this case, Ibanez lives up to its name as the king of the well-made mass production guitar. The frets are smooth and very well levelled! No dead fret or buzzing area!

We are not lying, we did not touch any of the setup on this guitar. The video you watched was played on an off-the-shelf piece! It is that good! 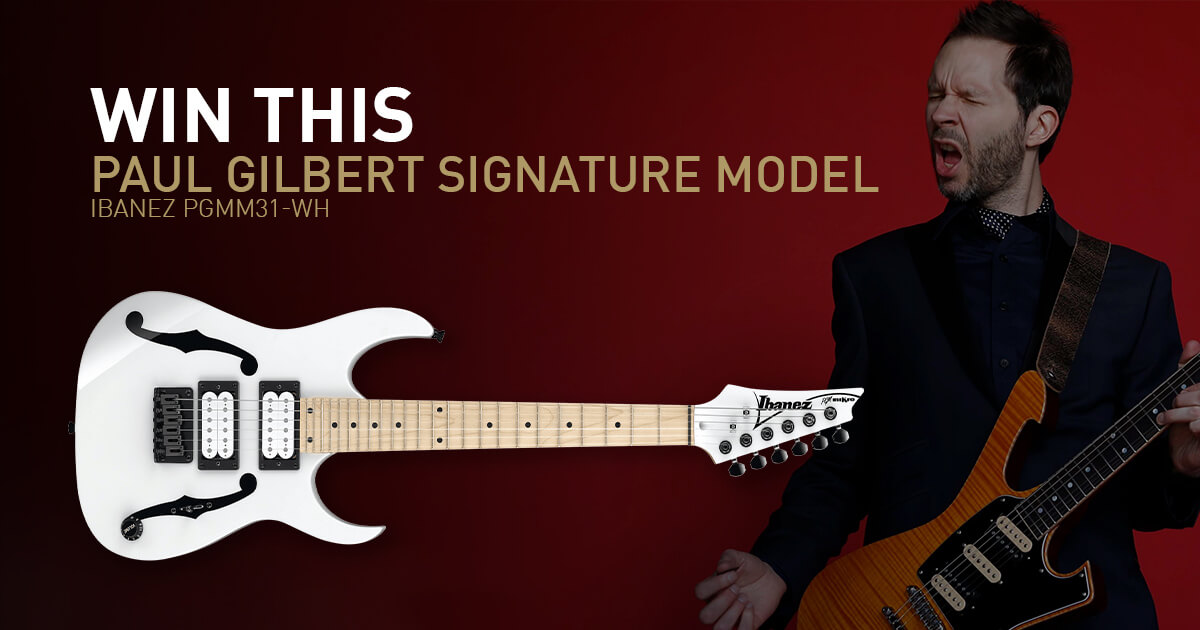 Before you assume we were asked by Swee Lee to promote this, we are just big fans of Paul Gilbert and wish to share the good news with everyone! To win this guitar, simply buy a ticket for this show and follow the instructions in this link! We managed to get our hands on one for this article, and are glad to have it so that all our students can get a go at this amazing guitar! Anyway, good luck to everyone and see you at the show! Paul Gilbert live in Singapore 2019! Paul Gilbert is one of the reasons Vinnie Classroom exists today in Singapore. Since emerging on the scene with RACER X, so many lives around the world have been transformed by his mad skills – his amazing speed and accuracy, along with beautiful melodious phrasing. But to the general public in Singapore, this name is probably not so well-known. So just who is Paul Gilbert?

From platinum album sales and number one chart success as a founding member of MR. BIG, to frightening the guitar community with new levels of ferocious picking technique with shred-pioneers RACER X, to exploring punk, pop, classical, blues, jazz, and progressive instrumental styles in his solo career, Paul Gilbert has recorded a massive amount of stunning guitar music, all while circling the globe to play sold-out arenas from Japan to Jakarta.

Paul’s style stands out for it’s rare combination of accuracy, creativity, and power – all which are balanced with Paul’s sense of humor and pure love of music.

Although Paul is best known for his work with MR. BIG and RACER X, he has also toured with Joe Satriani’s G3, played in a host of tribute concerts with legendary drummer Mike Portnoy, and been integral in the design of his signature Ibanez PGM and Fireman guitars. Paul Gilbert posing with his wall of guitar cabinet back in Racer X days.

Paul’s legacy as a guitar instructor began when he was eighteen, when he was hired to teach at Hollywood’s Guitar Institute of Technology. Paul’s groundbreaking “Intense Rock” videos and DVDs have inspired legions of guitarists to improve their accuracy, speed, and phrasing. Years as a columnist for Guitar Player magazine, and most recently, Premier Guitar magazine, along with giving countless clinics, private lessons, and serving for five years as the dean of MI Japan, have given Paul deep experience in the art of communicating music to all levels of guitarists.

Over twenty-five years in the music business have only increased Paul’s passion to explore the possibilities of music and the art of playing the guitar. Whether he’s playing to 10,000 fans or jamming one-on-one with a student, Paul is living his childhood dream of taking the sounds in his head and bringing them into reality – on the electric guitar.

Why you should attend the concert

Musicians from the golden era of rock music are now granted greater mobility to travel the world. Thanks to Inokii, this is the first time we can experience Paul Gilbert live in Singapore 2019 as a solo artist! This means less talking and singing,  and more wonderful showcase of his guitar mastery! As the the venue Substation is not a particularly big space, it means you get to be up close and personal with Paul even if you are the last person to enter the hall! Missing this show will be a huge loss for any guitarist or aspiring musician!

Where to get the tickets?

Tickets are available from BookMyShow.com. Early bird tickets are all sold out, but if you are a student of Vinnie Classroom, you get a special discount from us! Speak to our admin today! This is because I truly believe I have the duty to get as many people as possible to see my hero first-hand. Besides, what’s do you have to lose?!

Also, the number of VIP tickets are selling out fast! With so many freebies that come with the VIP ticket, you must get it!

Good morning #PaulGilbert fan. Pls like and share this beautifully crafted video by our team #hea Paul Gilbert – Live In Singapore 2019 Behold Electric Guitar🇸🇬🎸Only a handful of VIP tix left.Details at event page. Date of m&g is 1 day before the show 9 December 2019 (timing to be confirmed) tentatively evening.