Fingerstyle Guitar, more than a guitar!

Our student Kryan performing his fingerstyle guitar song during our recital.

What is Fingerstyle Guitar?

Most of us were either really young or not even born when Chet Atkins took the world stage by storm. Unlike the superstars of today, there was no loud music or flashy colored lighting on stage. Instead, it was a small tv set-up with a small audience, some musicians and Chet right there in the middle. When Chet played his guitar, it felt like there were many more than those musicians on stage playing along with him. The secret was in Chet’s fingers. Even if those other musicians were removed, the music would still sound as full and as big! This was because Chet basically covered the Bass Guitar, Rhythm Guitar and Lead Guitar parts all at once! Occasionally, he would even cover the percussion section! This was the birth of fingerstyle guitar!

The technique involves using each of the right (or left) hand fingers independently in order to play the multiple parts of a musical arrangement that would normally be played by several band members. Because bass, melody, and percussion can all be played simultaneously, fingerstyle tends to sound a little piano-like. It is the perfect style of music for playing without any other musicians. Fingerstyle guitar is one of the few musical techniques that’s actually fun to learn because it is so flowing and calming but at the same time so agressive and powerful. What’s more, the fingerpicking just seems to bring the best sound out of the acoustic guitar as an instrument.

While this list is definitely not complete, we are certain that it is enough to give you a headstart to knowing more about this wonderful world of fingerstyle guitar! Share this list to your friends and soon we will see The Day Finger Pickers Took Over The World 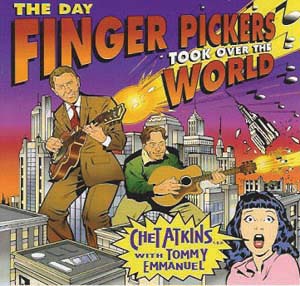 While most fingerstyle music seems to have a layer of dust over them, modern guitarists have been churning out arrangements of modern music. Andrew Foy, as mentioned in our Top 10 Fingerstyle Guitarist list above, is notably the most hardworking in arranging modern pop songs into fingerstyle! Mike Dawes, another up and coming fingerstyle guitarist has a very unique method of merging percussive sound, harmonics and unusual harmonies, giving a modern and unique feel to fingerstyle guitar.

How to learn fingerstyle guitar?

Music arranged for fingerstyle playing can include chords, arpeggios, melodies with elements such as hammering on and pulling off with the fretting hand, using the body of the guitar percussively, and many other techniques.

There are a number of fingerstyle techniques. For beginners, fingerstyle guitar may feel a little strange and challenging since you’re plucking the strings directly with your digits. Thumbpicks are often seen on fingerstyle guitarist because of the need to emphasize the bass tone.  Thumbpicks aren’t absolutely necessary for you to play this way. In fact, you have also to make sure you can keep the finger picking pattern down and consistent.

For more on fingerstyle guitar, check out our guitar lessons or sign up for a free Trial Lesson. Give it a shot, you’re going to have a ton of fun! But if you are not convinced that a young kid will be able to learn equally well, then let 11-year old Dave show you how it is done!